Today, the term “phalanx” is used to describe a group of individuals working closely together to achieve a common purpose.

At Phalanx CrossFit, that purpose is to advance fitness and improve quality of life.

Historically, the term “phalanx” referred to the Greek fighting formation in which soldiers created a defensive perimeter around themselves using their shields.  Each man would hold his shield to protect the soldier beside him, leaving one arm free to wield his sword.  Each soldier in the phalanx was confident that the men around him were supporting him so that he could concentrate on his own fight.
The Phalanx has been described as “a single impenetrable unit” and a source of strength. 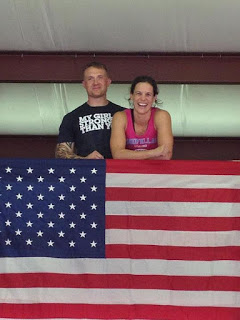 Zack and Tammy have a passion for programming, coaching, and training, and their goal at Phalanx CrossFit is to foster a positive training environment with unparalleled coaching where everyone is: comfortable being uncomfortable; willing to try new things and fail and try again; eager to improve and encourage others as they improve; in love with the challenge and excited about pushing themselves.

We derive our beliefs from our own faith and experience, as well as from the CrossFit methodology.  We attempt to follow Coach Greg Glassman’s simple prescription for “World-Class Fitness in 100 Words:"

Zack started doing CrossFit in August 2007 and began coaching in June 2008.  As an active-duty Army service member, he has had the opportunity to train athletes at all levels (from couch potato to Special Operations soldier) in locations all over the world.  He is known around the gym for his knowledge, patience, and kindness.

Zack met Tammy in the summer of 2010 after she had been doing CrossFit for six months.  He began training her as an athlete and a coach, and they formed a partnership that became Phalanx CrossFit.  Since then, Tammy has competed in the Mid-Atlantic Regionals in 2011, 2012, and 2013. She also serves in the Army Reserve.